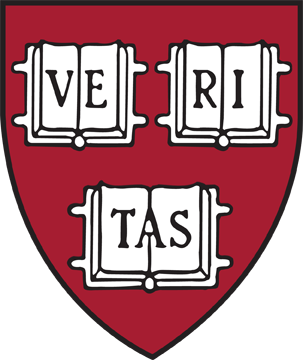 Last year's racers braved cold, rain, crashes, and even a bike theft to race their bikes. Despite all this, they performed above expectations, bringing home racing honors and the respect of the rest of the Eastern Conference. 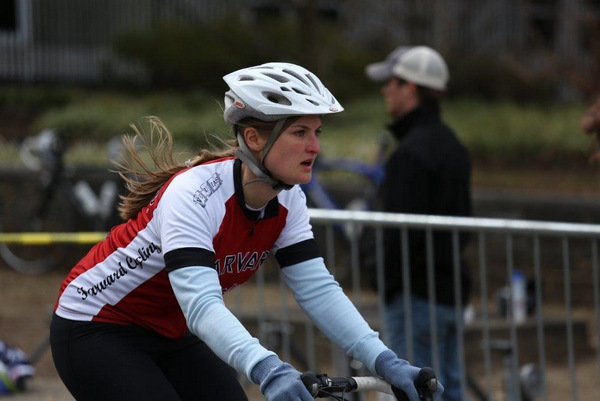 Women's Captain
Road
Long road races, hill-climb time trial
Army road race and all Team Time Trial races
Women's A
2014: 2nd at the Stevens Duck Country Road race, 3rd at the Army Spring Classic, 2nd at the ECCC Conference Championships Criterium, 1st at the Army Spring Classic ITT, 3rd at Mayor’s Cup 2014
Tonia is a 4th year graduate student in the department of Systems Biology. Formerly an elite rower, she joined the Harvard Cycling team in the fall of 2013 and got hooked! Rowing training translates well into cycling which allowed her to upgrade to Women’s A by the end of her first season. She is working on improving her technical skills and can’t wait for racing in the spring. 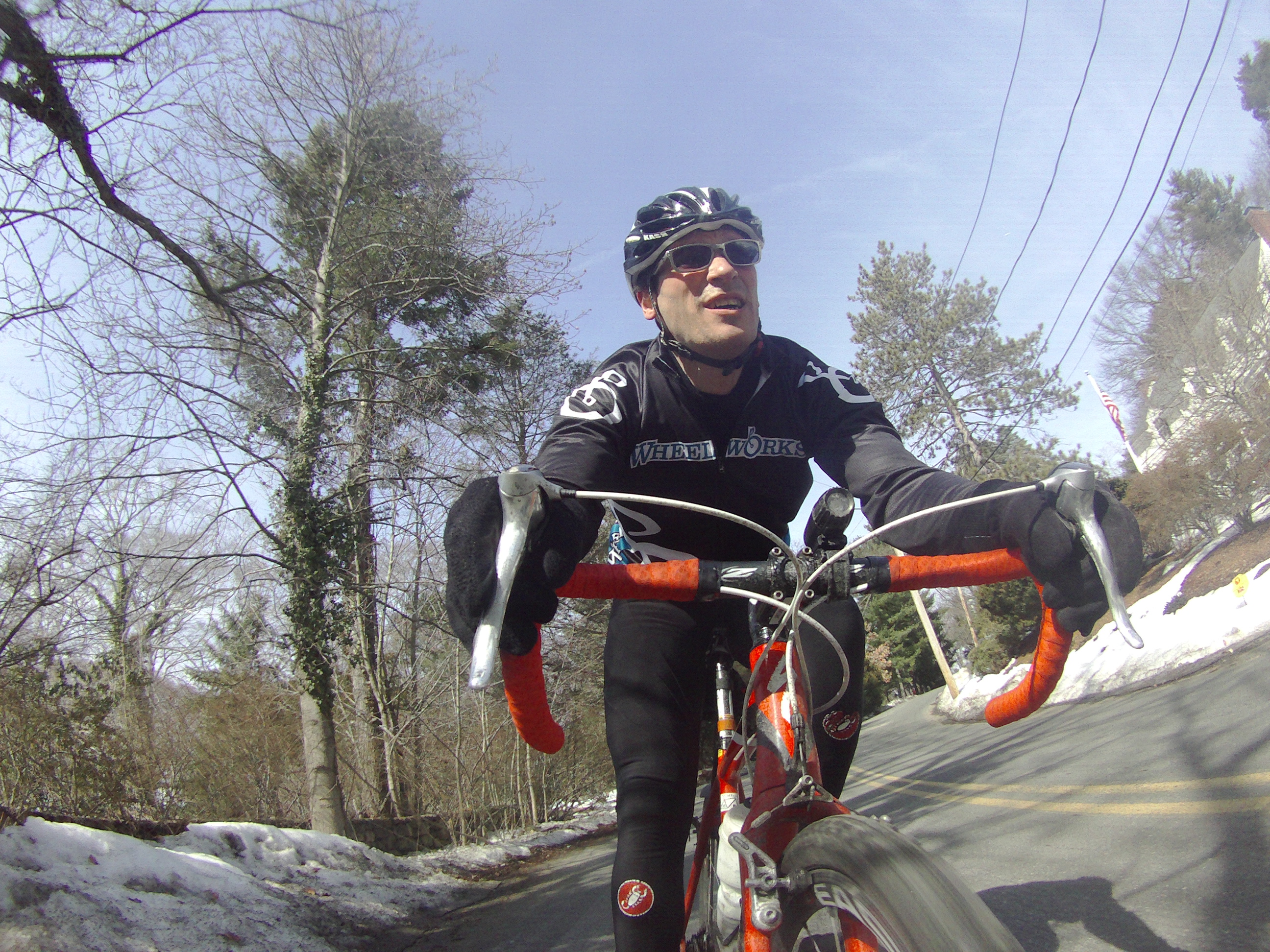 Coach, training teammate, the idiot who’s out there when it’s cold and dark…
Not much, if the ice cream would only stop calling me…
Climbing, sprinting, flat speed, sushi.
It’s a common misconception that bald guys are racist.
Old (was a Cat 2)
I once won a comforter in a prime in a pro race on an 85-degree day.
Originally from: Wayne, New Jersey – I got better. I came to the team as a refugee from Northeastern, which didn’t allow a cycling team, met John Allis in 1985, been with the team since. John Allis coached the team for 30 years, not for the fame or fortune, but because it was the right thing to do – John’s my hero. In 1999 one of the riders asked me to be her coach, I found out later that she felt sorry for John ’cause she was so slow at first. Starting with new riders and creating good cyclists has been one of the most rewarding experiences of my life. 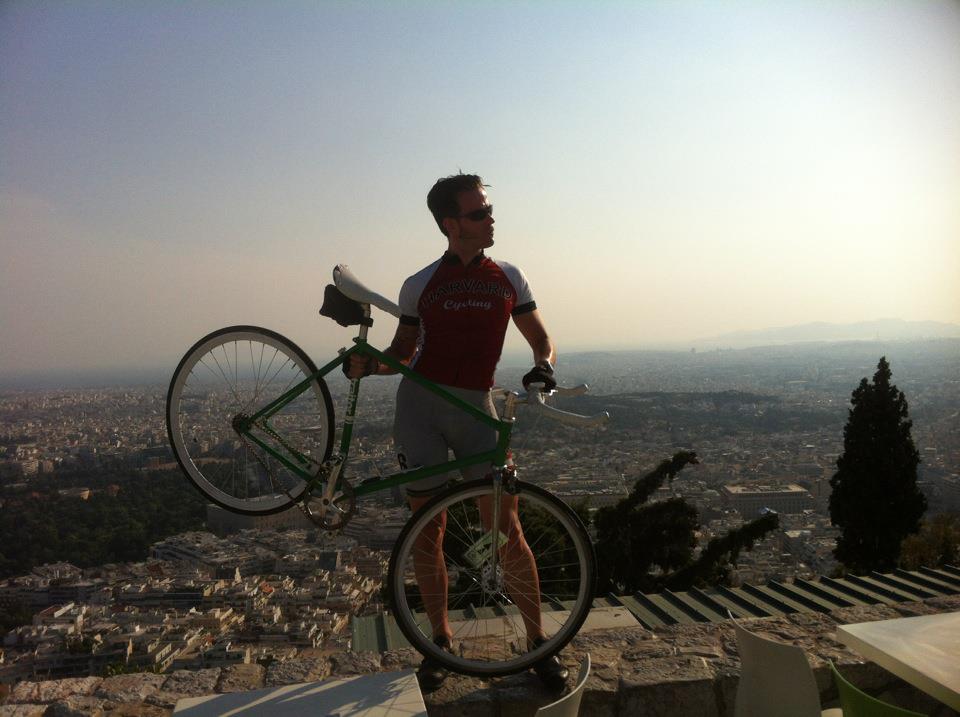 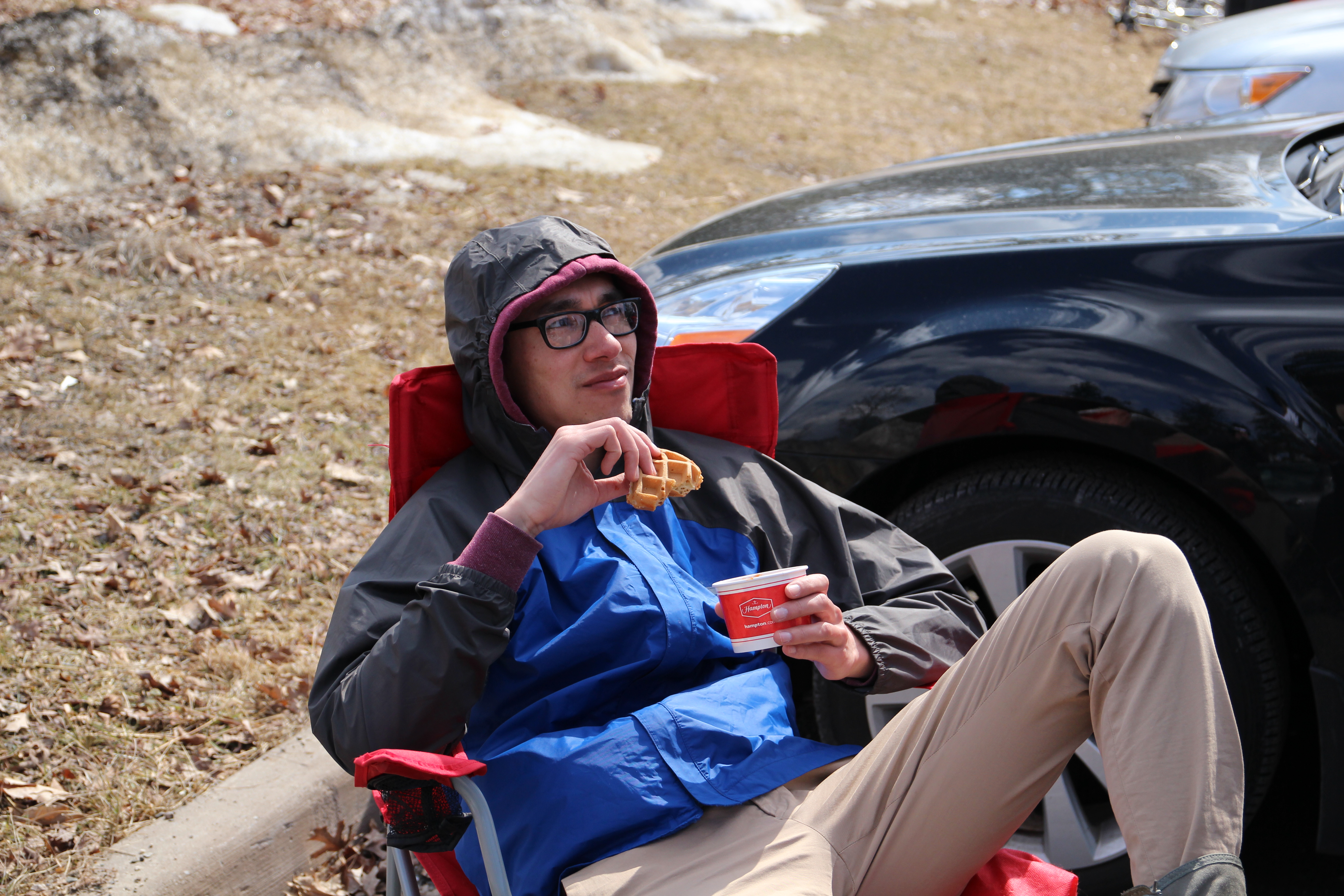 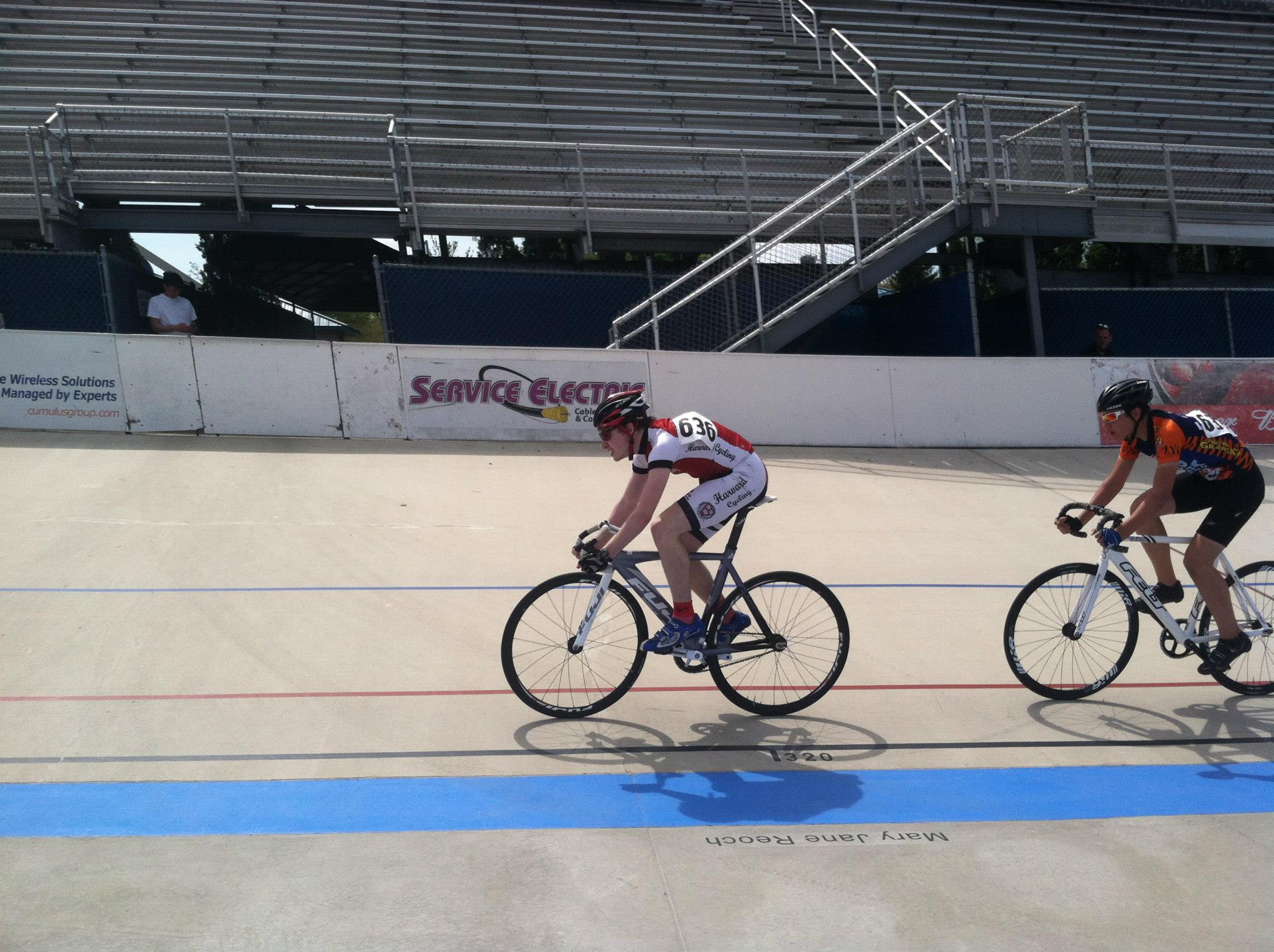 Treasurer
Road, Track
Sprinting
The Showdown T T-Town
Men's D
Coming soon
Having done some cycling before, David joined the team in 2013 as a Freshman, ultimately competing in two road races in the spring. This year, he hopes to train more, race more, and move up a Cat. 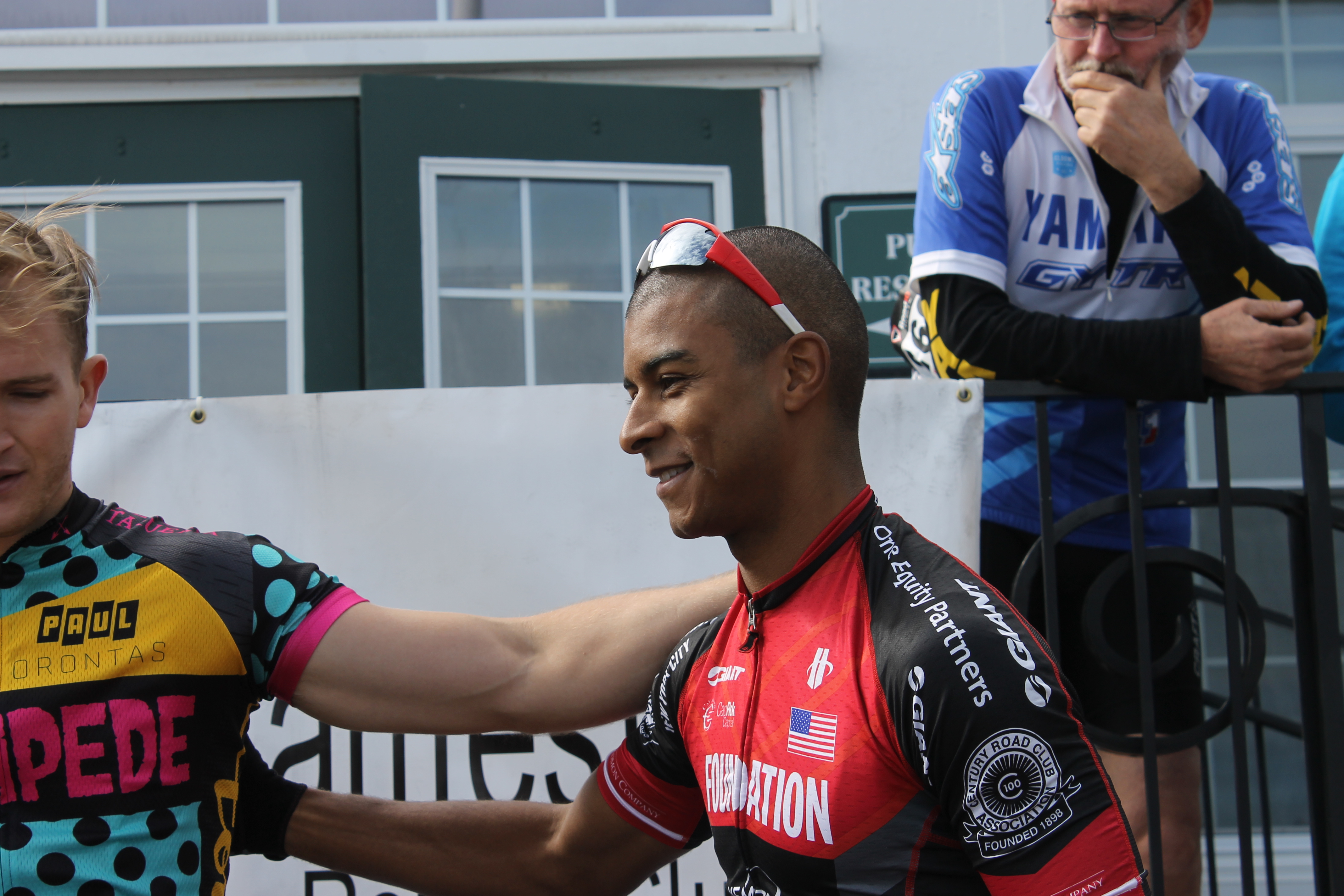 Member-at-large
Road
All-rounder
All road races
Men's B
http://www.usacycling.org/results/?compid=395999
I am a 2nd-year student at HBS. Started racing with Foundation Cycling Team in NYC two years ago. Can’t wait to help HUCA have a big 2015 in the ECCC! 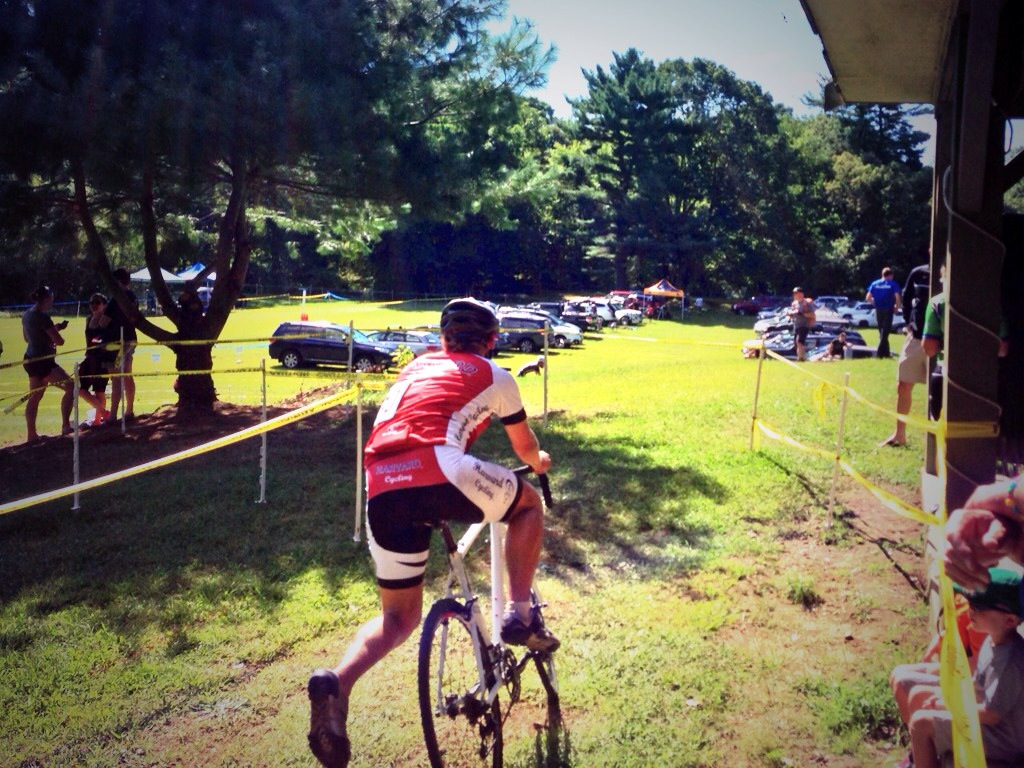 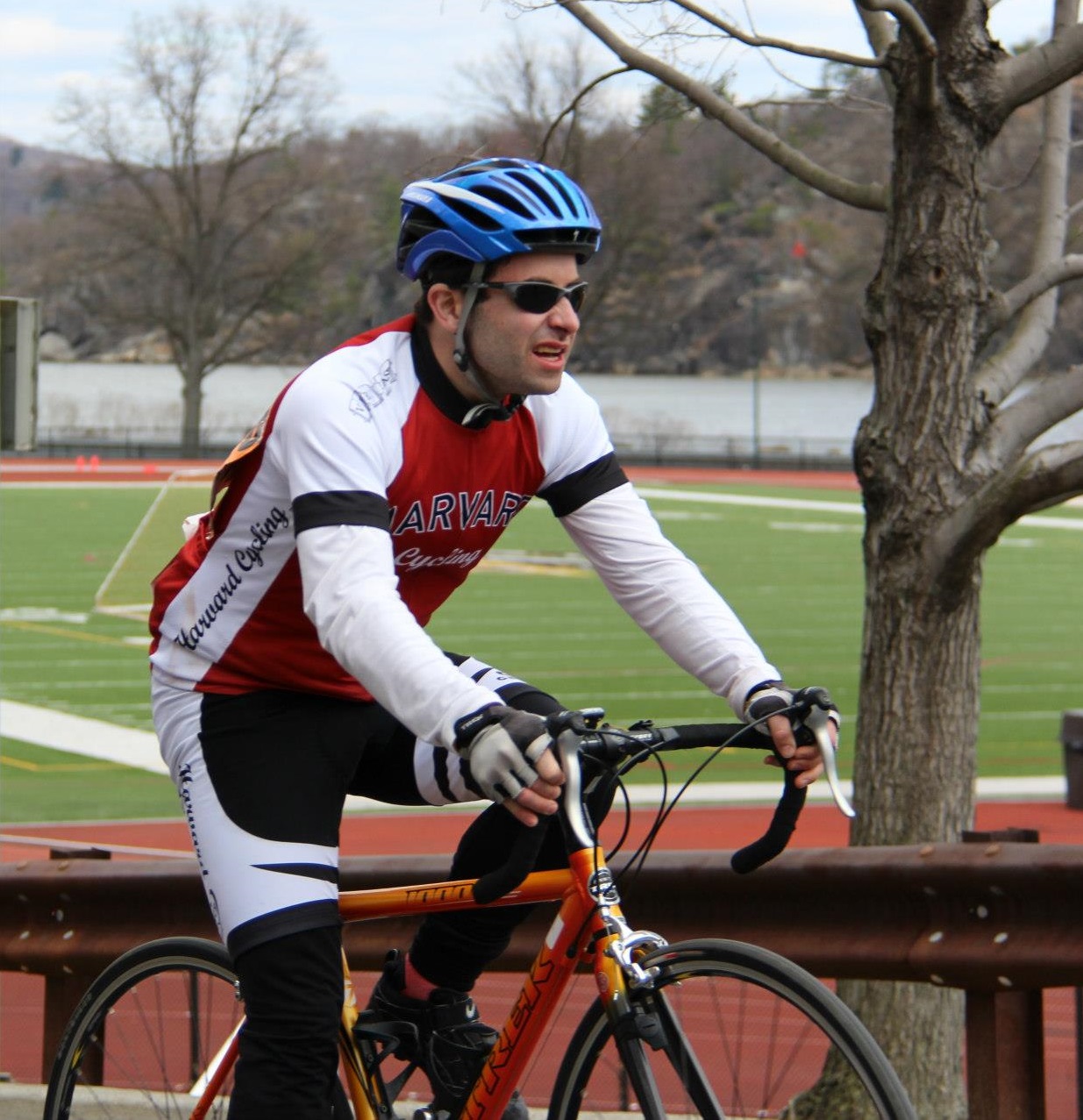 Sponsorship Coordinator
Road
Long road races
Army Spring Classic, Penn State Black Mo’ Road Race
Men's D
5th 2013 Army Spring Classic Intro Road Race, 10th Stevens Duck Country Apocalypse Intro Road Race
Ted’s cycling career started with HUCA his first year in grad school. He finally decided to try racing with the team for the first time during the 2012-2013 season. He got hooked on racing pretty much about the same time he finished his first race. He’s a Ph.D. student in Applied Physics and hails originally from the NY suburbs of Long Island. An enthusiast of century rides, he prefers challenging road races and after a strong summer of riding is looking forward to a successful year with HUCA as a Cat D racer while he wraps up his degree. 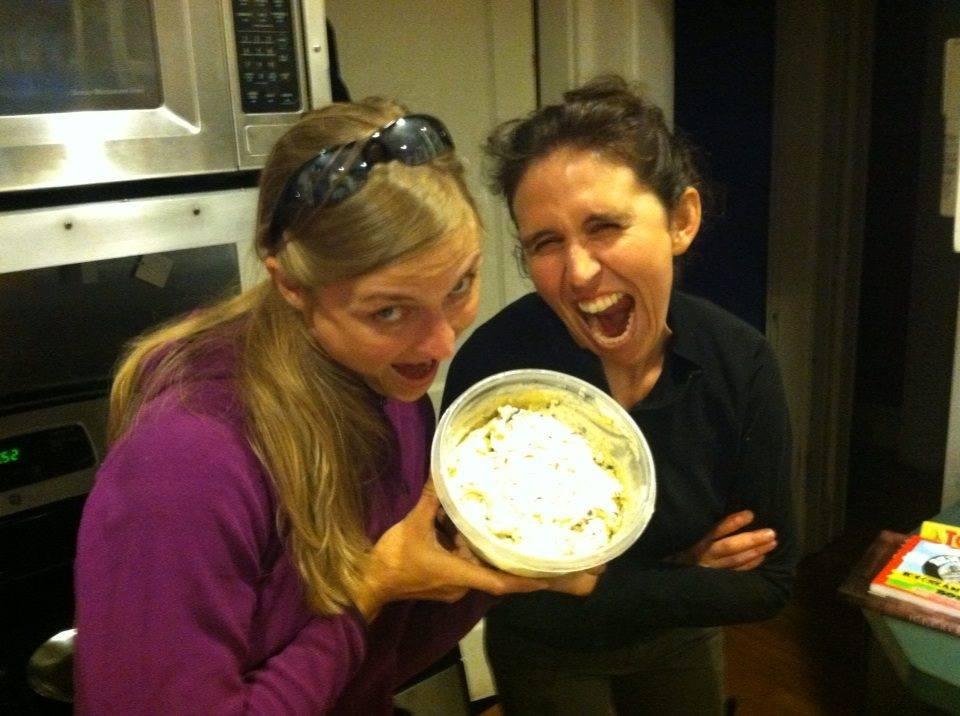 Hostess with the mostest, training buddy
Road
climbing, learning new tricks, starting fires
TBD!
Intro
Coming soon
Formerly a powerhouse of the Harvard Women's Cross Country Team, Senta (like many racers) got into cycling following an injury. She joined her first HUCA ride in 2014 for a Harvard to Harvard jaunt. She didn’t quite manage to stick with the group that day. The next time out, she didn’t get dropped, but she did toss her cookies. Senta has been a regular on the Hammer Ride and an invaluable training partner. We can’t wait to get her out to some USAC races this spring and summer. 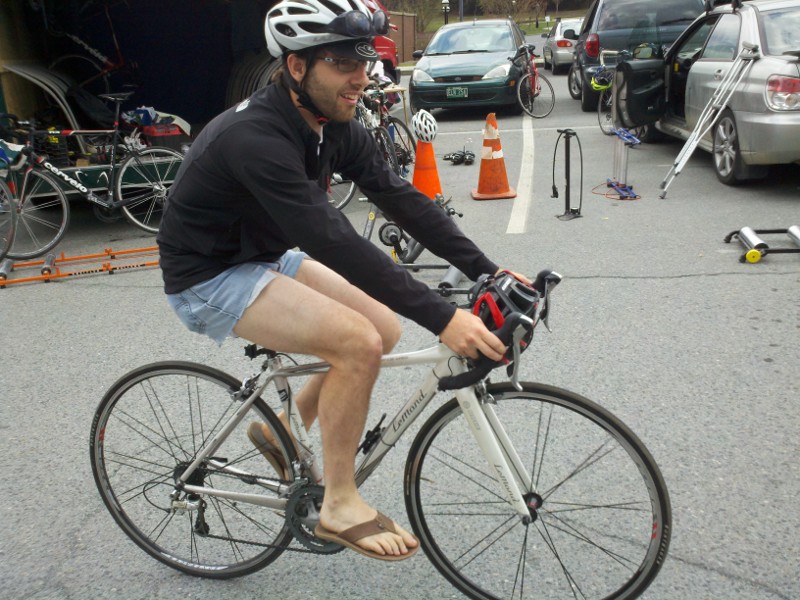 Member-at-large
Road, Track, Cross
Dirt road adventures, ice cream rides
Dartmouth Road Race
Men's C
Like my next dissertation chapter, I promise these are on their way.
Jesse joined the team as a graduate student. He’s worked almost every bicycle related job in Boston, from messenger to mechanic to 7-person-bicycle captain, so he figured he’d give racing a try. He’s hoping that this is the year he finally convinces himself to train hard over the winter and post some results in the spring. 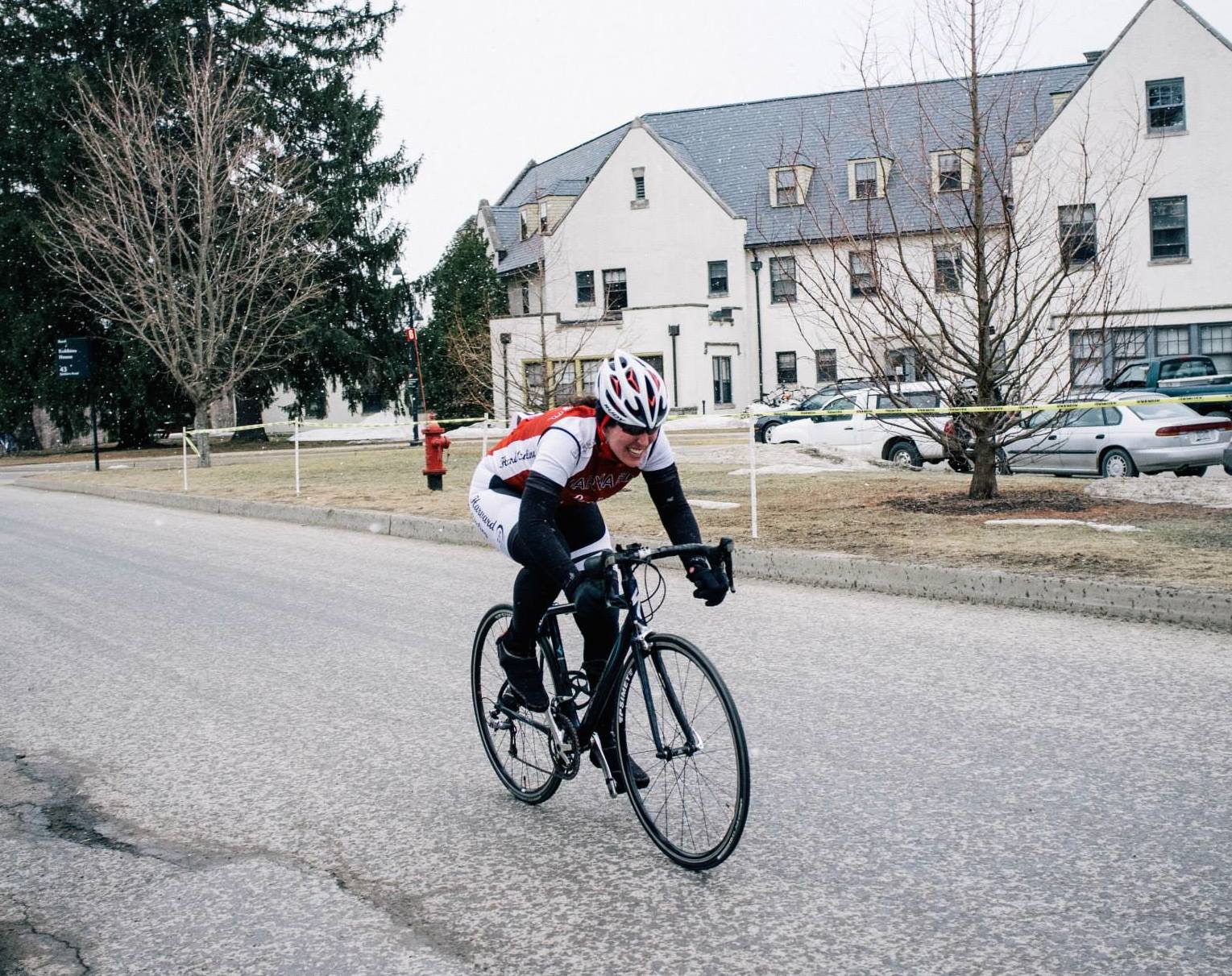 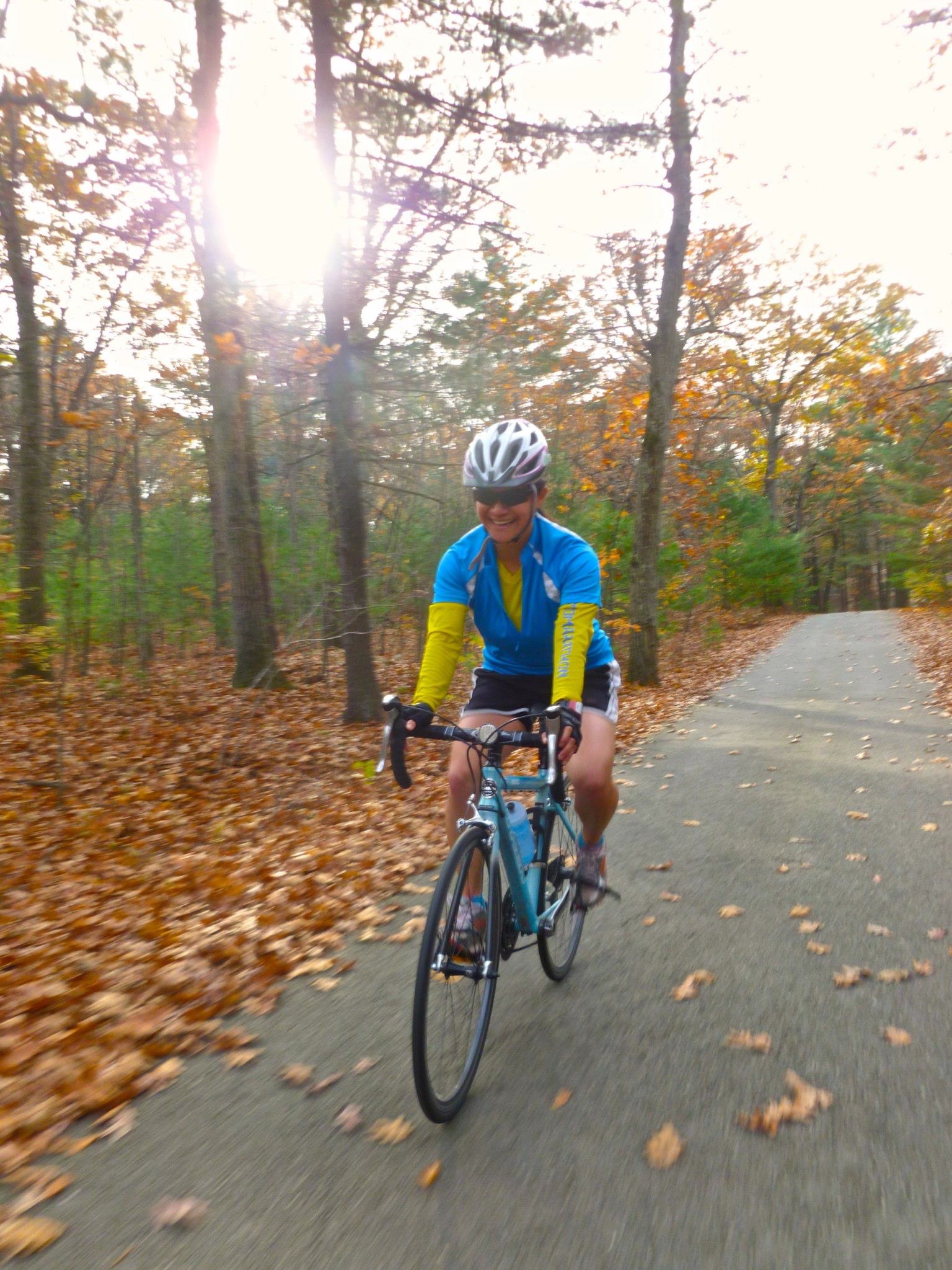 Member-at-Large, Member-at-Small, Tenured member of social committee
Road
I love hills
MIT ITT
Women's C
Cycling with both collarbones intact
I came to cycling after a running injury – and have been hooked ever since. I liken riding a road bike to a jockey on her horse, becoming a unified being, but the bike isn’t as smelly and doesn’t poop. Also, for both jockeys and cyclists, there is a growing number of talented and inspiring female athletes. 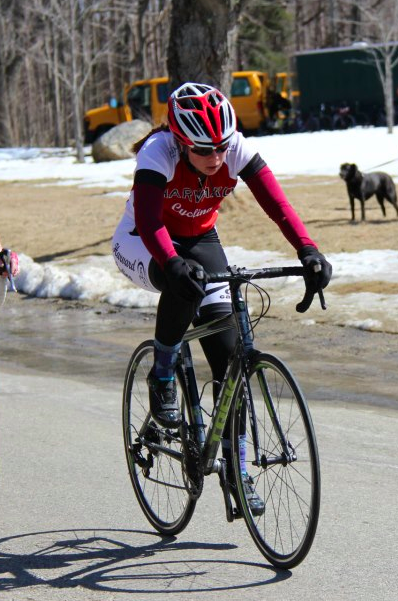 President
Road
Climbing
Philly Phlyer Road Race
Women's B
3rd MIT Criterium Women’s C; 5th Philly Phyler RR Women’s C; 4th Stevens Duck Country RR; Women’s C, 2nd Columbia Grant’s Tomb Criterium 2013; Women’s C, 1st Rutgers Circuit Race; Women’s Intro, 4th Rutgers ITT.
Starting as a complete beginner her sophomore year after converting from lacrosse, Jamie is now an avid lover of cycling. She loves to climb, and progressed to the Women’s B field during her first racing season. This year should make for an exciting season for Jamie as she missed out last racing season to indulge in gelato in Rome. She is thrilled to be back for her final season with the team and hopes to climb as many hills as possible. 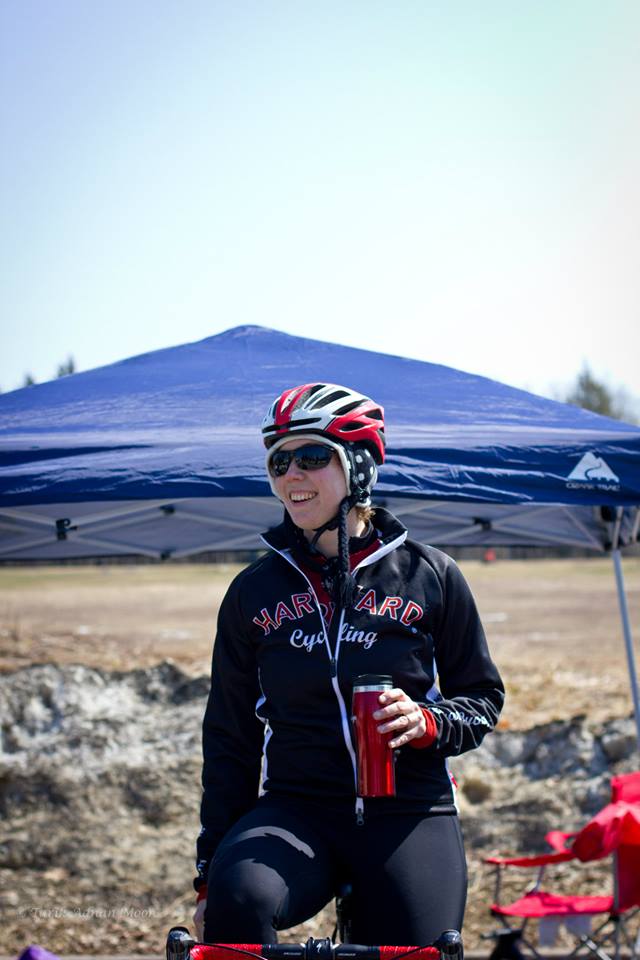 Poobah
Road, Track Cyclocross
sprinting, getting impatient going off the front too early only to blow up and finish off the back
Mayor's Cup
Women's A
1st place, Women’s B X-pot Crit
My love of cycling is in a category with my addiction to coffee: I could live without them, but that life would be a pale imitation. I feel tremendous gratitude toward the HUCA coaches and teammates who have introduced and supported me in the sport and I try to pay it forward by evangelizing for HUCA and bike racing in general. So if you have a conversation about biking I will probably try to convince you to try racing at about the 10-minute mark. In my first year of racing I learned how to draft; in I second year I found out about sprinting; and my aspirations for the 2015 road season are to learn how to corner like a beast and maneuver in a pack sprint, and take a women’s TTT team to collegiate road nationals in Asheville. Also to beat Colin at some town-line sprints. 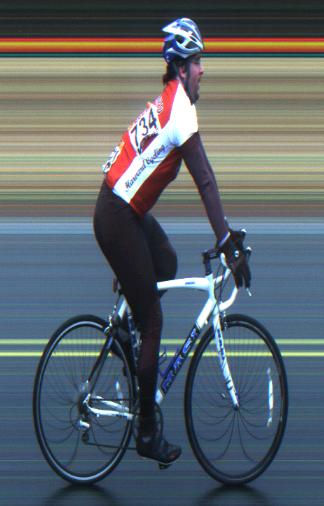 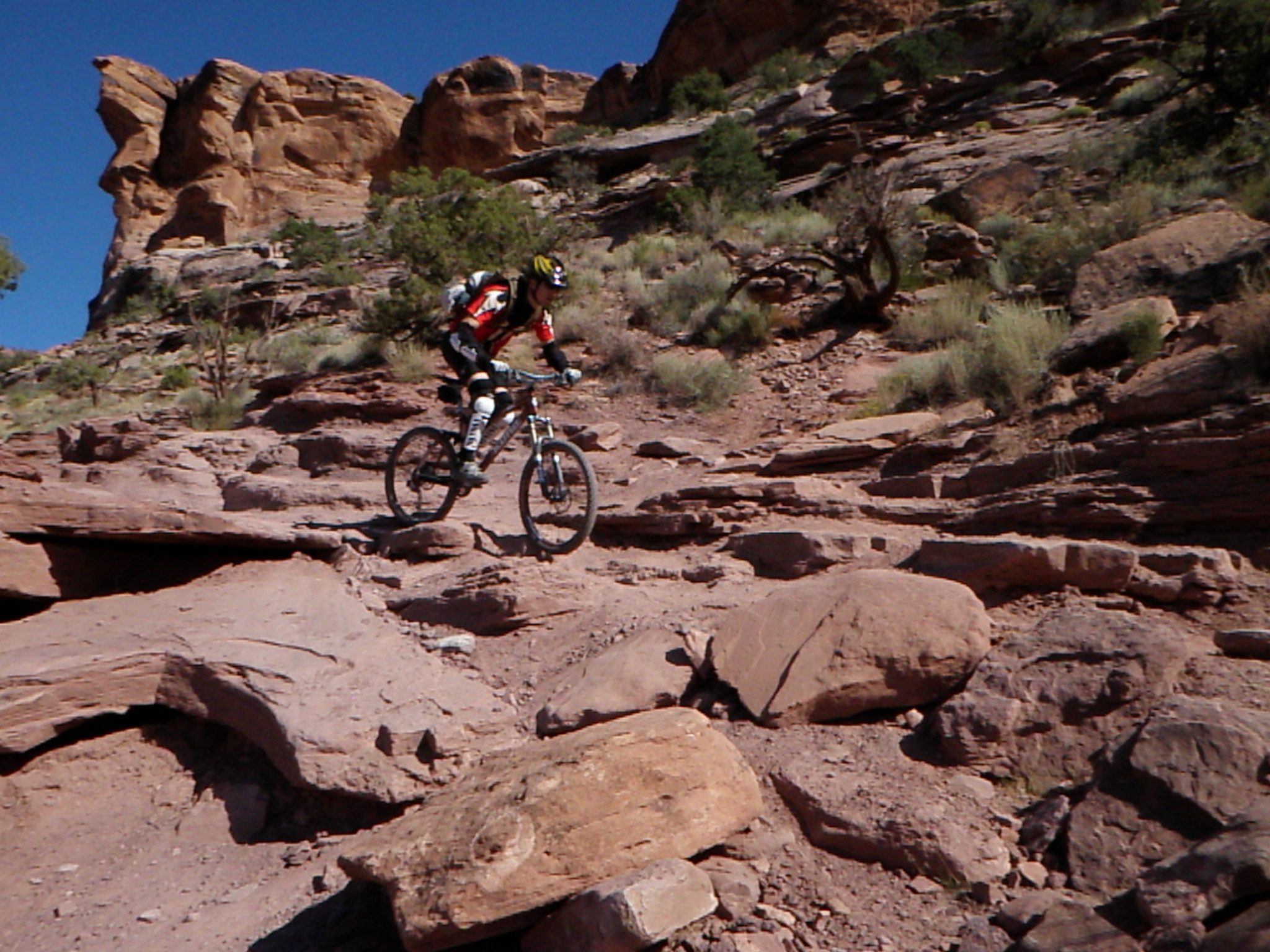 Mountain Bike Captain
Mountain Bike
Forming a MTB team
Northeastern
Men's B
more to come
When Simon asked if we had a MTB squad, we told him yes, if he would be the captain! Looking forward to growing our MTB team in the coming seasons. 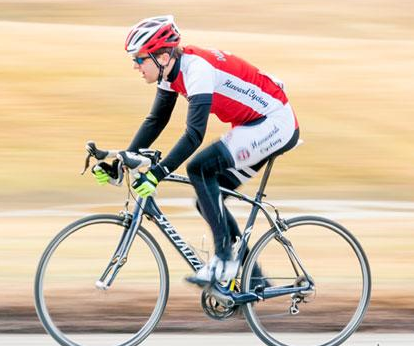 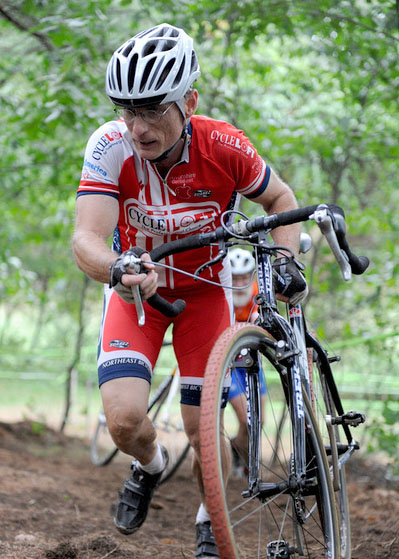 Assistant Coach
Track, Road, Cyclocross, Mountain, commuting, t
Getting the most out of the least bike
I loved the Saco Bay Criterium. Too bad it’s long gone. My only crash in a HUCA jersey. Aside from t
I’ll be a Cat 4 Master the rest of my days.
I married Betsy, November 1985
I first managed to balance on my big brother’s bike when I was six. I rode out the driveway and around the block. I was hooked and have never stopped riding since. The bike has been an integral part of my life and I am grateful for it. I built bikes from the dump and in doing so learned about machines and tools. That led me to engineering and a rewarding career. Engineering let me meet Amy Kerdok who got me involved with HUCA. HUCA got me back into racing and gave me the gift of meeting so many remarkable young people. I love helping people learn to ride because cycling has given me so much. I also serve as a USAC official, which helps make races possible in our region. My palmares aren’t worthy of note, so I can’t believe how lucky I am that HUCA keeps asking me to coach them. 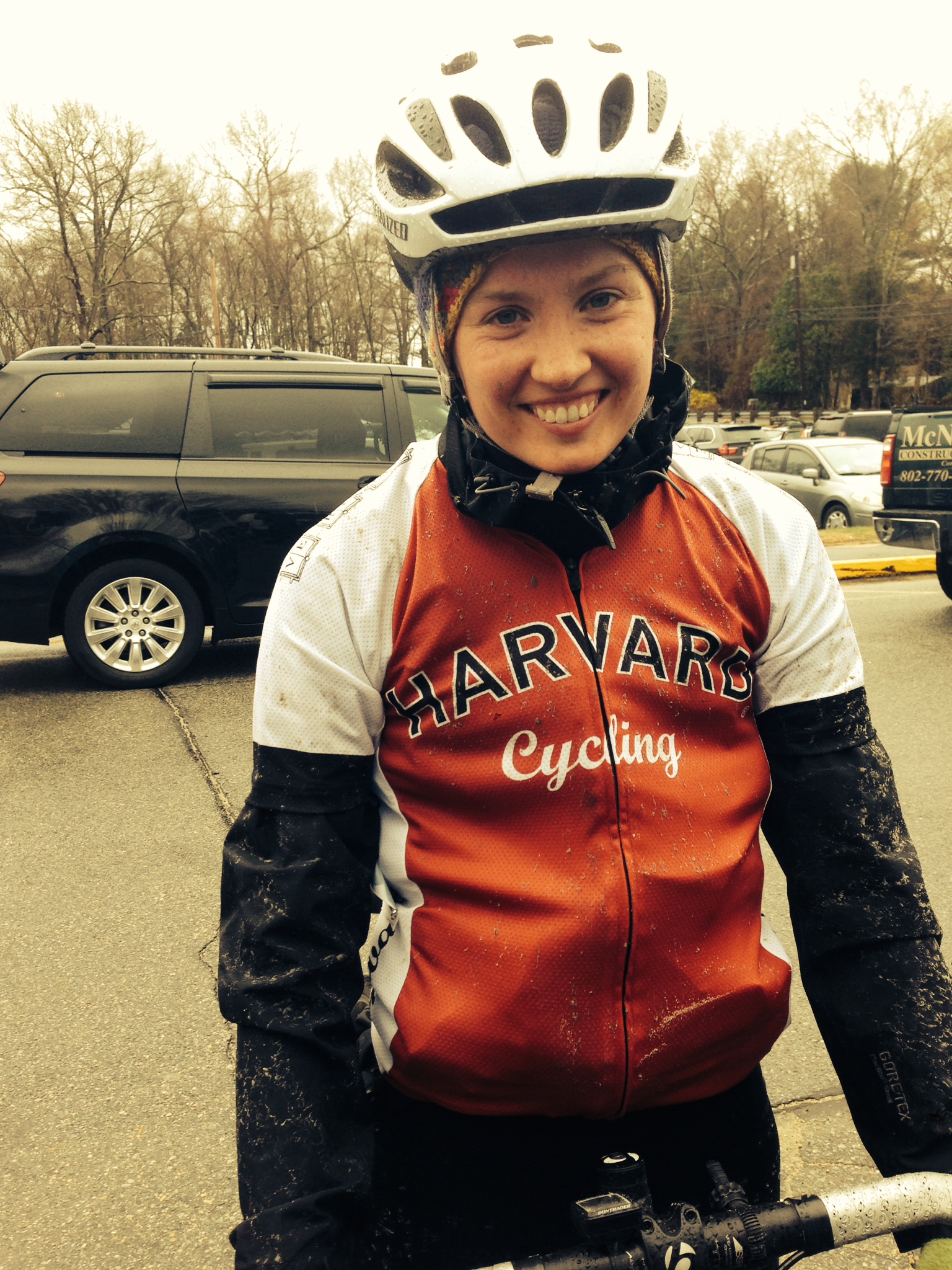 Socialite
Road
long rides
MIT Time Trial
C
Did not "see the cow"
I’m a second-year PhD student in History. As a former rower, I enjoy cycling because I don’t even have to stand up to exercise. And I can wear lycra. I enjoy climbing, and cycling in solitary wild places alone and for a long time. But I can be sociable, I promise. 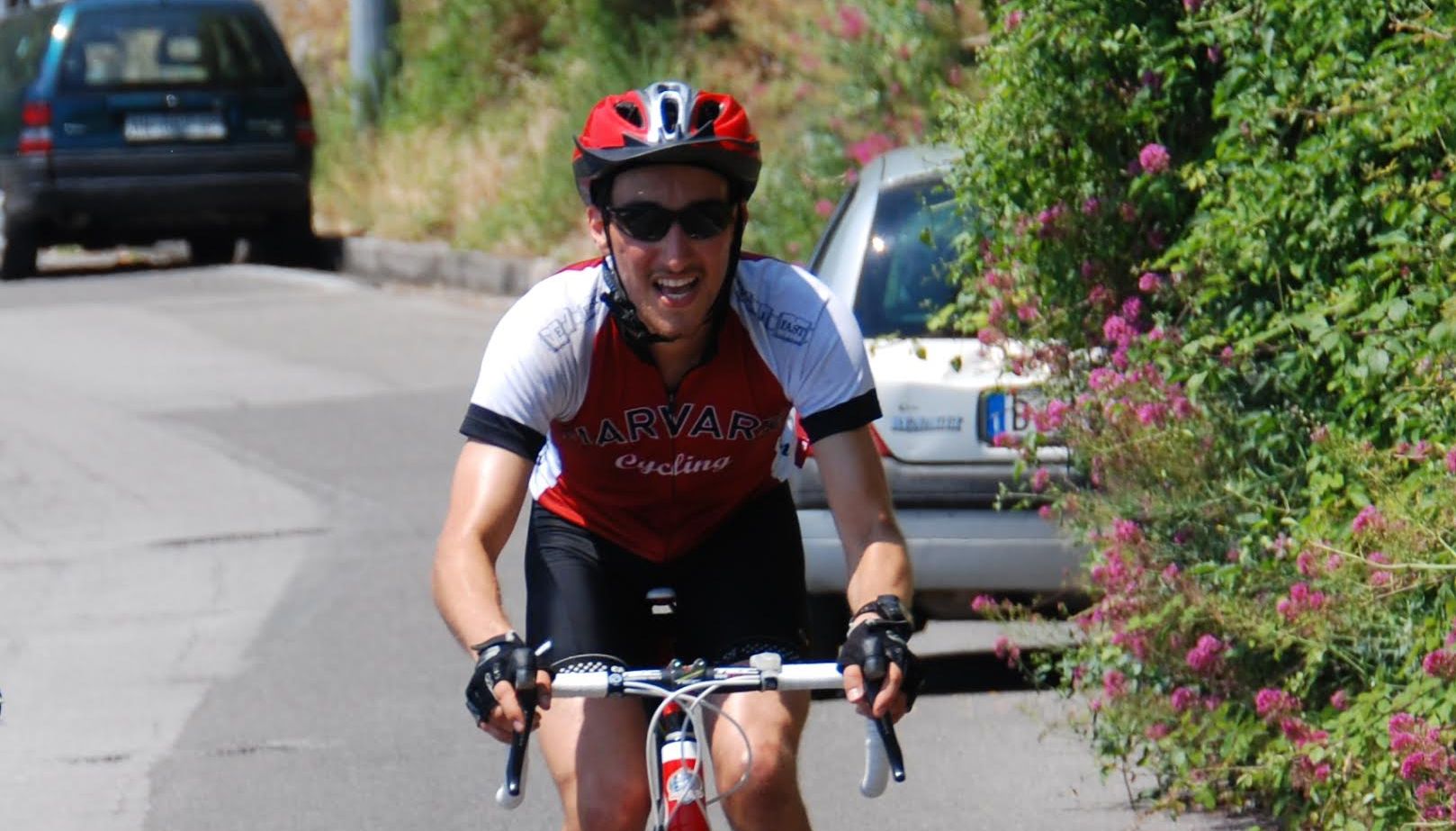 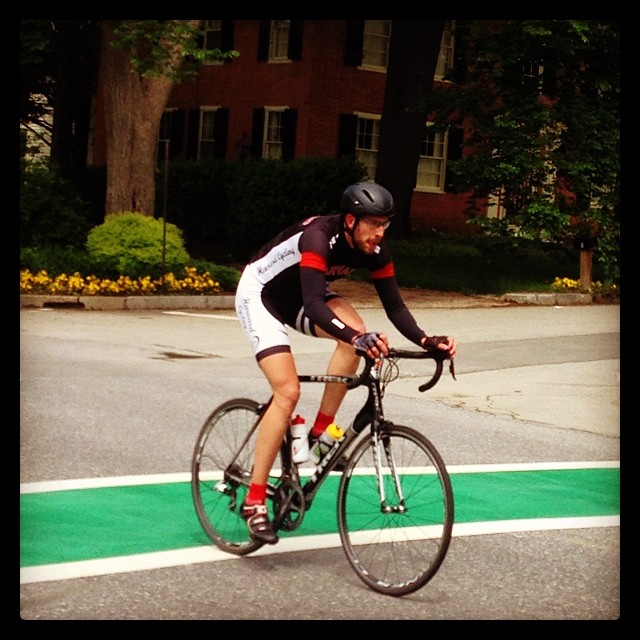